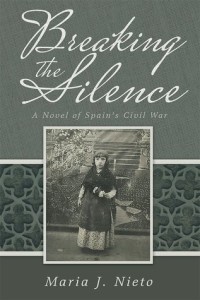 The following is a guest post by Maria Nieto, author of Breaking the Silence. If you would like to write a guest post on my blog, please send me an e-mail at contact@cecilesune.com.

My name is Maria Nieto, and people have been questioning why, at the age of 85, I wrote  a book called Breaking the Silence.

It is a book describing the pain and the horrifying days of a small girl’s life during and after the Spanish Civil War. There are moments of humor in the book, but mostly it deals the devastating effects that war creates for children. The book goes a little further into Spain’s post-war years under the yoke of a fascist dictatorship using ruthless mind altering techniques on children in order to assure their total loyalty to the new order. Mari, the child in the book, ends with the terrible decision she must make to atone for an act of treason she innocently committed.

The book is written as a novel, a work of fiction, but fiction is often impregnated with truth.

Please allow me to go back in time just a little.

I was born in New York City in the middle of the Great Depression.  Just a year later, the laws that rule the universes (I do not believe in coincidences), transported me to Madrid, Spain. Two years later, the same universal laws took my mother away from me. I do not remember the days after she disappeared, but I do remember that even though I forgot how to speak English, at stressful times strange sounds would almost sing inside of my mind. Sounds like “mommy”, “daddy”, “Teddy the bear”, and sometimes I could hear the soft voice of a woman whispering something that sounded like, ”you are my princess”. Nothing more.

Three years passed and I suddenly found myself in the middle of falling bombs, crashing buildings and the passing of marching tanks in the night making cracking noises on the  cobble-stoned street as they passed by the house.

Spain was at war. A war of brother against brother, and father against son: The Spanish Civil War. I lost most of my childhood friends  who died torn to pieces  under the explosions of bombs, the fire of machine guns, or the falling of mortar shells.  I survived day after day holding on to the image of a dark haired woman who held me in her arms in times of danger.

After the war, Spain fell under the tyrannical fascist dictatorship of Francisco Franco, the Spanish Army officer who initiated the revolt against the Spanish Republic.

People were imprisoned and killed by the thousands. All freedoms were forbidden. Children marched in the streets dressed in Nazi-like uniforms with extended arms in a Nazi salute singing fascist songs to the beating of drums and the waving of flags. Soon I too became one of those children. 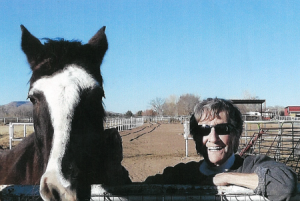 Some years passed and during  my early teens, I was found reading a Reader’s Digest (in Spanish). That type of reading was forbidden. Nothing foreign was to be read in Spain, and no listening to radio stations from other countries was allowed. Because I was an American Citizen, I did not go to jail. Instead,  my father was ordered to have me out of the country within three days. An uncle in New York who had converted into Judaism arranged for a Jewish organization helping children out of Nazi Germany, to look over me in Portugal as I waited for a ship to take me to the United States.

Franco died and Spain’s new monarchy passed a law of silence, “a pact of silence”, as it was called. The people of Spain were not to talk or act on any issues that incurred during the war or during the dictatorship after the war. Franco’s murderers never went to trial for their crimes and continued to flourish and continued to use their money to hold on to power. After that, when  I visited Spain, neither my family nor my friends would talk or mention the  terrible years. During a visit to my grandmother’s  village, I came upon  a group of older women in the town’s plaza seated in a circle  noisily and happily talking as they did their sewing. I introduced myself and told them that my grandmother  was born in the village. They recognized her name, but when I told them that I had lived in the village for a short time during the war, the women looked at me, and one of them clipping her words almost yelled, “Ah, that was a long time ago.” All the other women went back to their sewing in silence.

That was the beginning of the heavy weight in my chest that made me write Breaking the Silence.

After four years in the Navy, the GI Bill helped me to finish nursing school  and after graduation I was able to work during  the day  and go to school at night. It was years before I finally gathered enough diplomas to teach me how  to help emotionally wounded persons identify their pain, and hopefully resolve it.

When  my working days ended, the heavy weight in my chest returned, and strange rumblings again woke me at night. As time passed, the weight got worse, the rumblings got louder.

Finally, it became clear to me what was happening: I was choking on Spain’s silence denying me of my childhood, as well as my childhood friends being recognized and remembered.

That is why, very slowly and in silence, I began to write Breaking the Silence and no one, friends or family knew about the book until it was published. My family in Spain received it well, and now  the rumblings and the weight in my chest are gone, and  I can again sleep through the nights.

I hope people will read it. I hope that in some way it may help people throughout the world  and the United States reject any further war suggestions from their leaders.

I started another book. Maybe  I can finish it before the laws of the universe take me away from this planet and I begin to use my experiences on earth elsewhere.