The Tragedy of Fidel Castro by João Cerqueira 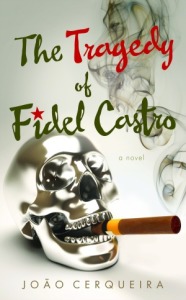 The Tragedy of Fidel Castro by João Cerqueira

The following is a guest post by João Cerqueira, author of The Tragedy of Fidel Castro. If you would like to write a guest post on my blog, please send me an e-mail at contact@cecilesune.com.

It was through Portuguese writers – Camões, Fernando Pessoa, José Saramago, Lobo Antunes –  that I learned to write. Hence my belief that form – that is, command of language – is as or more important than content.

I am interested in exploring the complexity of human nature. Why there is so much violence? Why there is so much stupidity? Are we really so much different from other animals? My novels satirize modern society and use irony and humor to provoke reflection and controversy

The Tragedy of Fidel Castro combines history, politics and religion. It is at the same time an historical fiction, a satire, and a magical realism story. The main characters are Fidel Castro and his rival JFK. But God and Jesus also play important roles.

I think the book relates to American culture because the book stands for political freedom and for humanitarian, or Christian values. I tried to show that religious or political dogmas always lead to fanaticism or dictatorship. Human beings are (or should be) different from other animals because they have the ability to think, to question things and to laugh. That is why we have democracy and freedom – and some cultures do not.

The story is centered around the mythical figure of El Comandante and the political system imposed by him in Cuba. The dictator is given a voice, with which he vociferously defends his regime and attacks the capitalist enemy – the “Fidel Castro’s diaries”. However, when his starving population erupts onto the streets in protest following the collapse of the Soviet Union, he begins to have doubts about the right course of action to take. In the narrated scene – which is based upon an account that I heard in Havana from a Cuban eye-witness to the event- , the unexpected appearance of Fidel is enough to transform the protests for freedom and economic reform into cries of “Long live the Commandant”, “Long live the Revolution”. However, from then on Castro’s confidence in his revolution and people begins to crumble. Alone, surrounded, and aware that the end is approaching he plays his last card – a war destined to unite the nation.

But what he did not expect was a divine intervention.

The second coming of Christ provides the opportunity for a reflection on the extraordinary event known as the Miracle of Fátima – in 1917 three children saw the Virgin Mary and were entrusted with three secrets, one of which predicted an end to Communism – and the consequent existence of a God. The visit takes place at the request of a character called Fátima, who believes that she can produce a portent involving the sun in order to prevent the imminent war between Fidel Castro and JFK. In Christ’s dialogues with Fátima and his heavenly Father, he reflects on human nature, good and evil, the possibility of having inspired Fidel Castro, the origin of the universe and his own existence as a divinity. Unable to find answers to most of these questions, he sometimes loses his patience at the foolishness of humans, and has serious doubts as to whether they can be redeemed. However, aided by Fátima, he ultimately manages to bring about a genuine miracle – the corollary of The Tragedy of Fidel Castro.