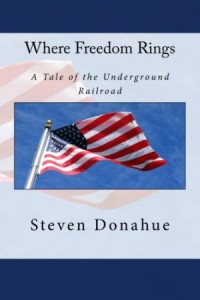 Where Freedom Rings by Steven Donahue

The following is a guest post by Steven Donahue, author of  Where Freedom Rings. If you would like to write a guest post on my blog, please send me an e-mail at contact@cecilesune.com.

That is why I feature brave, daring women in most of my books. From Amanda Rio’s struggle with an abusive husband (Amanda Rio), to Karen Thorn’s hunt for a serial killer (The Manila Strangler), to Amy Sutter’s unrelenting efforts to rescue her kidnapped father (Amy the Astronaut and the Flight for Freedom), I am fascinated with the indomitable spirit of women.

This trend continues with Kelsa Colver, the heroine of my new book Where Freedom Rings: A Tale of the Underground Railroad. Kelsa is a slave on a Georgia plantation in 1853. Despite the horrors of her bondage, and the brutal impact of slavery on her husband and two young sons, Kelsa is at first too frightened to risk trying to escape. She finally reaches her breaking point after a fellow slave is murdered by a plantation owner. Kelsa can no longer tolerate her family’s repression and the constant danger they live in, so she begins an odyssey with them toward the northern area of the United States in hopes of finding the freedom she desires.

Along the way, the Colvers are assisted by various abolitionists, including a neighboring farmer, a progressive priest, a sympathetic lawman, and notable figures Harriet Tubman and William Still. However, their efforts are impeded by a dark family secret, and the interventions of a corrupt clergyman, vicious outlaws, and greedy slave hunters.

Surprisingly, my admiration of strong women does not come from literature. No, I did not read Jane Eyre, Little Women, Anne of Green Gables or any Nancy Drew books in my youth. Quite the opposite. I read stories by John Jakes, Matt Christopher, Edgar Allan Poe and Ernest Hemingway, and the majority of those stories featured masculine male characters.

So, where does my awe of resilient women come from?

I’ve known many strong women who have quietly maneuvered through life with the guts and determination usually credited to successful men. These ladies have overcome illnesses, conquered emotional distresses, and even prevailed over physical abuses that would destroy most people. To protect their privacy, I won’t use any names, but these remarkable women remain an inspiration to those of us who face everyday challenges head-on.

Yes, I love strong women. And I hope they continue to inspire other authors in their literary endeavors.

About the author and his work: Steven Donahue’s Website.