Running on All Four 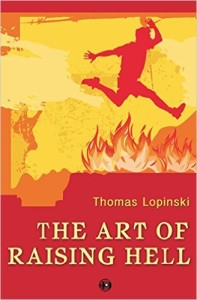 The Art of Raising Hell by Thomas Lopinski

The following is a guest post by Thomas Lopinski, author of The Art of Raising Hell. If you would like to write a guest post on my blog, please send me an e-mail at contact@cecilesune.com

I didn’t sit down to write a novel entitled The Art of Raising Hell. In fact, the book was already finished and half way edited by the time my dear friend suggested it. We’d been going back and forth brainstorming trying to find that perfect title when it appeared. Not only did it catch my eye, it literally reached out, yanked me by the collar and shouted, “This is the one, you idiot!”

That “ah-ha” moment will live with me forever. The lightbulb in my head was blinking red, yellow and green all at once beckoning me forward. After that, tweaking the storyline and focusing on the theme came easily. In a sense, I was “running on all four” as I say in the book.

“Running on all four,” is more of a state of mind as opposed to a concept. We, as Homo sapiens, walk around on two feet our whole lives, using our opposable thumbs and both sides of the brain like no other creature on earth. We think about the consequences, constantly weigh our options, and then act accordingly with almost every aspect of our lives.

Yet, those animalistic urges that we’ve been trying to suppress for thousands of generations still seem to find a way to rise to the forefront when we least expect them. It doesn’t take much to trigger one. I’ve seen it appear in a person’s eyes right before they close them and dive off a cliff into the water below. They’ve been spotted at the top of a hundred and fifty foot water tower where someone has just spray-painted their initials. And late at night, they’ve been known to show up out of nowhere in the middle of a poker game when someone decides to go all-in. Yes, these are all moments that you can classify as “running on all four.” 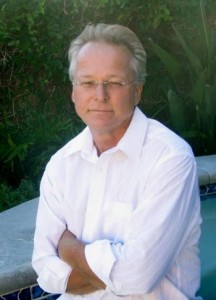 In The Art of Raising Hell, there are many such moments and then some. I tried to capture what it means to chase after life as opposed to being chased by it. I think we all strive to experience that sensation whenever possible. Sometimes though, life and reality end up getting in the way. There’s the baby that needs fed, the mortgage that needs paid and the clock that just keeps on ticking.

So, if you’re in a place where you just can’t throw caution to the wind and run on all four, go ahead and pick up my book. At least, there you’ll be able to experience the sensation through the colorful characters of Kickapoo County for a few hours.

About the author and his work: Thomas Lopinski’s Website.