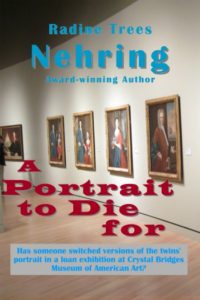 The following is a guest post by Radine Trees Nehring, author of A Portrait to Die For.

Thinking back over many years of writing, I have just now come to the realization that–behind all my non-fiction and fiction–there’s a one-word theme:  Redemption.

That is not what I have been telling people for years. I’ve said–and believed–that my writing has always been inspired by my love for the Arkansas Ozarks, its nature, landscape, people, events, and attractions. Of course all of that is true. But, looking back over the thirty years I’ve been writing for publication, I now find the theme of redemption throughout, and I didn’t even know it until a few months ago.

At first I wrote only non-fiction based on my interest in environmental causes. My first published essay (sold and read internationally) was about saving the lives of at least a few hummingbirds by painting the red electric fence insulators in a neighbor’s cow pasture black. A small thing, but still, not long after, farm stores no longer sold red insulators. Maybe I contributed a tiny bit to that change.

And, that’s how it went for more than ten years of environmental writing until finally an entire book, Dear Earth: A Love Letter from Spring Hollow, full of my life-changing experiences with the natural world around Spring Hollow, was released in New York in 1995.

Well, I thought, what next? Hmm. I love reading mysteries. Could I write one?

The first and second novels in my To Die For series sold to a publisher in 2001. A Valley to Die For came out in 2002, Music to Die For in 2003. I was on a roll–writing and selling mystery novels involving characters I really liked, telling about their interaction with people they were attempting to help, and revealing how those attempts got them into extremely dangerous situations. My love for the Ozarks continued to be featured in my writing because every novel was set in a real location that’s much loved by Arkansans and tourists alike. And, the crimes I wrote about were based on situations arising naturally out of chosen locations and that area’s history. It was challenging, it was fun, and evidently appealing to many readers all over the United States.

It wasn’t until I was near the end of A Portrait to Die For that the term “redemption” came up. In that story, an insightful reporter realizes that the relationship between her brother Mark, a disturbed Iraq vet, and my series’ male protagonist, Henry King, a retired homicide detective, was mostly about redemption. 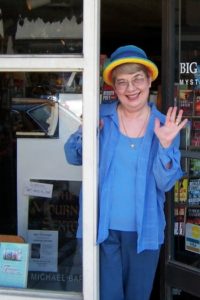 “. . . something changed this time,” Maylynn said. “What?”
As soon as Maylynn had spoken, he felt Carrie’s head turn toward him.
After an awkward silence, Henry finally said, “Okay, if all this is confidential, it’s Mark.”
“Mark? I don’t see . . . but wait, maybe I do. Oh, dear God, I do. Mark, and redemption.”
He sighed. “You could put it that way. For the first time ever I truly know how it feels when you think you have it in your unique power to help someone. I am also aware that kind of caring was something I did not find in police work. And,” he looked over at his wife, “I now understand what has motivated Carrie.”

In every single novel in my series one character or another, most usually my main character, Carrie McCrite, has recognized, not only danger, but needs, griefs, and fears in another of my book people. Then, without me even realizing it, a door to redemption and healing has been opened.

What a lovely thing for me to finally understand.

Where do my ideas come from? How will I–and how will you–answer that now?

More about the author and her work: Radine Trees Nehring’s Website.