Not in the Pink 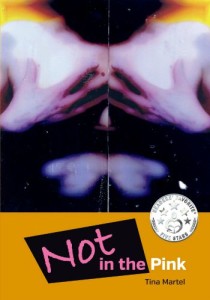 Not in the Pink by Tina Martel

The following is a guest post by Tina Martel, author of Not in the Pink. If you would like to write a guest post on my blog, please send me an e-mail at contact@cecilesune.com

I am a visual artist who accidently wrote a book. I never meant to write one. It just happened. I was diagnosed with Stage Two B Breast Cancer in 2011. My entire life changed in a heartbeat. I taught in the Fine Arts Department of a post-secondary institution. I had an evolving art practice that encapsulated painting, drawing, paper making, video, and large-scale installation. I had a supportive husband, good friends, and family. Enter the truck that hit me. Like Wile E. Coyote. Flattened. When I peeled myself off the ground I found myself in the labyrinth of the medical system.

While I was going through treatments: surgery, drugs, radiation, I could not be in my studio. To me, not being in the studio is the equivalent of taking a fish out of water, but still setting it beside the fish bowl. I was gasping. I decided that at the very least I could keep sketchbooks. I had the vision of me being in the hospital, wiling away the hours by filling the pages. I never counted on only having one arm, as the other was frequently immobilized with an I.V. But I could and did draw at home during the seemingly endless hours I spent in isolation, too worried to venture out because of my compromised immune system.

I took numerous photographs and videos…partially because artists document strange things. I collected all of my medical records, x-ray, ultrasound images, everything I could get my hands on. Admittedly, my obsessive nature also made me pour over them by the hour in an attempt to understand what was happening to my system and how I could be an active participant in the decisions about my care.

I wrote emails to my friends and family on a regular basis. My “update” letter. I received requests to be added to the list because people heard they were entertaining. I wrote the way I talk: a little brash, a liberal sprinkling of dark humor and to my mother’s distress, an occasionally foul mouth. After treatments finished I did resume painting in the studio. 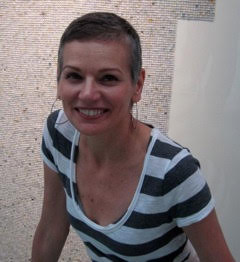 I am an avid reader and I read as much as I could set my hands on. I quickly and perhaps unfairly realized I couldn’t find a place for myself in the literature. Books seemed to be divided into two categories  – inspirational or how-to. The possibility of me turning into a glowing ball of enlightenment during this turmoil seemed slim. And the rest were informational but clinical. The conversations I had with fellow patients in the waiting rooms were not matching what I was reading. Many women felt pushed into the positive, pink ribbon, teddy bear culture. They wanted to talk about their fears, the realities of what was happening, the strange things people said to them and how they were or were not coping.

All of these things would coalesce to become Not in the Pink. My thought was perhaps I could be a voice – not only for myself but for those women who didn’t speak up about what a diagnosis of breast cancer meant to them.

I began assembling Not in the Pink after I finished treatments and returned to work. I would lay out the pages the way I envisioned them and my husband, Doug, an amazing graphic designer, would put them together. The images evolved with far more ease than the writing. I am grateful every day for my editor, author Barbara Scott, who in its final stages whipped it into a cohesive manuscript. There were days when I was sure this could never happen, but I published my illustrated, graphic, funny, sad and at times terrible memoir in November of 2014.

I am frequently asked “Was it therapeutic to write?” I ask “Have you ever written a book?” Then I answer “If I wanted therapy I would be laying on a beach in Mexico with my friends – drinking tequila.”

In May of 2015, it was #2 on the bestseller list for McNallyRobinson Book Sellers. A few columns ahead of Dr. Suess and one behind best-selling author Guy Vanderhaeghe. If I am honest, that might be a little bit therapeutic…

About the author and her work: Tina Martel’s Website.