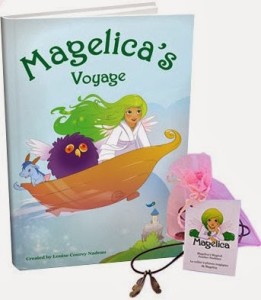 I met Louise Courey Nadeau at the BConnected Conference in Ottawa last April. She went out of her way to provide me with 2 copies of her book: one in English for me, and one in French for my daughter. I promised her I would write a review of Magelica’s Voyage on my blog. So, I’m sorry for the delay, Louise, but here are my thoughts about your book…

Magelica is no ordinary 12-year-old: she hatched from a blue egg,  and has fairy blood, wild green hair and a set of wings. The girl has never met her parents and has been raised by a kind and loving woman named Gri. Her only companion is her pet dragon, Tris, and sometimes she feels a bit lonely. During a powerful storm, the warblegrif Odin bursts into Magelica’s house and whisks her away in a quest to save the Isle of Dreams. In this voyage, they will meet a powerful wizard, a giant turtle and a kind queen. But will Magelica be able to learn who she is and who her parents are?

Magelica’s Voyage is a beautiful story for readers 4 to 11 years old. It has a powerful message for young girls: love is the key to happiness, and you can do anything if you believe in yourself. In fact, in the last few pages of the book, the author even gives the reader instructions on how to make their life magical. The book also includes beautiful and colorful illustrations that were created by Eugene, an artist who has worked on Disney animated movies. A pretty feather necklace comes with the book, and it brings positive energy to the person who wears it. In addition, the reader can find more information about the characters and the story on the Magelica’s Voyage website, along with a free coloring book and a free sticker book.

The only negative thing I will say about Magelica’s Voyage is that I thought the Turtle’s problem was solved a little bit too easily, and a lot of questions were left unanswered at the end. But I guess the whole point of this book was to introduce the different characters in the story to lay the groundwork for the series.  In fact, the author is currently working on two more books. I, for one, would certainly like to know more about this enigmatic green-haired girl…

About the book: Magelica’s Voyage

Another author I met at the BConnected Conference: JC Little