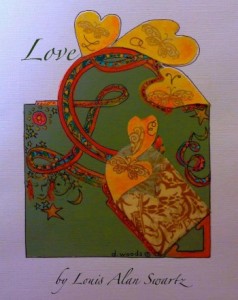 The following is a guest post by Louis Alan Swartz, author of Love, a special Valentine’s e-book containing 8 poems  from the chapter on “Love” in Constructed of Magic.

It is the passion of the first infusion and the intensity of admiration
that remains with us as an enduring afterglow.
As it grows and matures it becomes a steadfast support for each
other, ruggedly there for the long run.
It is a constant tenderness that deepens with the years accompanied
by a muscular loyalty and appreciation that just won’t quit.
It is a shared mutual joy that stands firm through all seasons.

There remains for us
The stark white light
Of the Boston Winter.
There remain
Mittens and mufflers
And Cambert* Tea with muffins.
And the treasure
Of each act of care rendered.
January’s freshly fallen snow
Crunching beneath my L.L.Bean boot.
There remain the giggling children
With their sleds on a snowy hillside,
Childhood’s laughter above the Charles River.
Warm woolen overcoats,
The joy of falling in love in winter.
There remains for us each increment
Of intense happiness given to each other.
And later the children in puffy snowsuits
Rolling in the snow in pink-faced delight.
The utter grace of being alive
In the newly fallen Boston snow.
*Cambert Tea—an English tea for children made with hot water, milk and sugar.
Tags:admirationappreciationbostoncambert teacharles riverconstructed of magichappinessjoylaughterlouis alan swartzloveloyaltypassionpoemssnowtendernessvalentinewinter