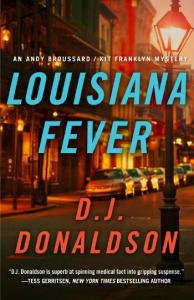 The following is a guest post by DJ Donaldson, author of Louisiana Fever, the latest installment in the Southern Suspense Series. If you would like to write a guest post on my blog, please send me an e-mail at contact@cecilesune.com.

When Kit goes to meet an anonymous stranger—who’s been sending her roses—the man drops dead at her feet before she could even get his name. Game on.

Andy Broussard soon learns that the man carried a lethal pathogen similar to the deadly “Ebola”—a highly contagious virus, feared worldwide for killing its victims (grotesquely) in a matter of days. When another body turns up with the same bug, widespread panic becomes imminent. The danger is even more acute, because the carrier is mobile. The man knows he’s a walking weapon and… he’s targeting Broussard.

And when Kit Franklyn investigates her mystery suitor further, she runs afoul of a cold- blooded killer, every bit as deadly as the man searching for her partner.

What inspired you to start writing, and when?

Oddly, the thought that I wanted to become a novelist just popped into my head one day shortly after my fiftieth birthday.  Part of this sudden desire was a bit of boredom with my real job.  I was an anatomy professor at the U. of Tennessee and had accomplished all my major professional goals: course director, funded NIH grant, teaching awards, and many published papers on wound healing.  So I guess I needed a new challenge. And boy did I pick a tough one.

I wondered, how does a novice like me learn to write fiction? Taking a few writing courses is an obvious answer. But I had the vague feeling that there were a lot of unpublished writers teaching those courses and I worried that all I’d learn was how to fail.  I’m not saying this was the best way, but I decided to just teach myself.  I bought ten bestselling novels and tried to figure out what made each of them work. What tricks were the authors using to hold my attention?  What made these books so popular?  In a sense then, maybe I didn’t teach myself.  Maybe Steven King, Robin Cook, Pat Conroy, Michael Palmer, Larry McMurtry, and James Michener did.  In any event, eight years later, I sold my first book.  So, it took me about as long to become a published novelist as it did to train for medical research and teaching.

Is there anything you find particularly challenging in your writing?

There’s nothing easy about any of it. But titles are a particular challenge.  I often can’t figure out what the title of a book should be.  Oh, I know when a title is great and so do you… It’s like the dealer at a flea market who once said to me when I picked up an expensive item to look at more closely…”You have good taste.”  Then, while I was secretly preening at his compliment, he added,  “Of course, it’s not that hard to spot quality.”   It’s the same with book titles.  Here’s a test:  What do you think of this title?  THEY DON’T BUILD STATUES TO BUSINESSMEN.

To me, it’s awful.  I’d think so even if I’d been the one to come up with it.  Actually, it was the famous writer, Jacqueline Susann, who crafted that one for a book that eventually became a mega best seller as VALLEY OF THE DOLLS.  Could there be anybody who likes the first title better?  Okay…. there’s always someone who enjoys being a contrarian.  But that still doesn’t make the first title any good.

Let’s try another.  How about ALL’S WELL THAT ENDS WELL?  That’s actually not horrible.  But it doesn’t sound like the sweeping saga the author wrote.  I certainly think the title it was eventually given, WAR AND PEACE, is far better.

So, it’s easy to know a great title when you see it, but boy is it hard to come up with one, especially when you’re writing a New Orleans series that needs to have a title that reflects the locale.  I usually sit for hours playing with words and rearranging them in what I hope are creative ways.  No matter what title I eventually settle on for a book, I have this nagging suspicion that even if I really like the one I pick, there was a much better one I could have used.  I just couldn’t find it.  My WAR AND PIECE was out there, just beyond reach.

Of all my New Orleans books, I’m the most satisfied with the title for LOUISIANA FEVER. Although the title doesn’t specifically mention New Orleans, it lets readers know a lot about the locale. It also strongly suggests that the story involves some kind of contagious disease.  The fever part of the title actually refers to Crimean-Congo hemorrhagic fever, a bleeding disease similar to Ebola. Most writers would be thrilled to have written a book that could be related to unfolding world events.  Normally, I’d be among them.  But in this case, I’d much prefer that there be no reason for Ebola to be in the news every day. I hope this threat is contained soon. 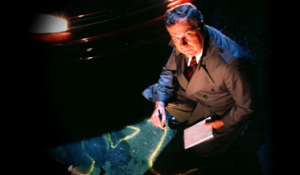 Are any of your characters based on real-life friends or acquaintances?

I’m sure my characters contain parts of many people I know.  At first I was worried that they might recognize themselves and not like what they read.  But I soon discovered that no one sees themselves as others see them, so any similarity goes completely unnoticed even when it’s there.

Do you plot or write by the seat of your pants?

I do a lot of planning and thinking before I start writing.  In my mysteries I always know who the killer is and why he did it.  Knowing who he/she is establishes a lot of the story and tells me who some of the other characters should be.  If I didn’t know who did it when I started writing, it would be impossible to scatter the appropriate red herrings and real clues throughout the book. Even my medical thrillers all have a surprise reveal at the end. Those revelations have to be carefully set up.  Having done all that planning, I then have to be sure I don’t make it all too obvious. Many of my readers who write Amazon reviews say they were surprised at the end. Occasionally though, a reader will think the story was too predictable. I’m never sure exactly how to take that.  If they mean all the loose ends were tied up and everybody got what they deserved, fair enough.  Because that’s exactly my intent. Our real lives are full of unresolved conflict and irritation, including hearing about killers and rapists who get off on technicalities. I think people read to escape that world.  I want my readers to smile with satisfaction at the end of my books.

Do you have any advice for other writers?

Don’t write for wealth or fame because most writers in the world, even those who have sold books to major publishers, can’t claim either of those status symbols.  There’s an old quote that says, “You can get rich in this country by being a writer, but you can’t make a living.”  Write because you love it.  If you don’t love doing it then you can be crushed by the difficulties inherent in the pursuit.

About the author and his work: DJ Donaldson’s Website.

Please note that the Southern Suspense Series (Louisiana Fever, Sleeping with the Crawfish, New Orleans Requiem, and Bad Karma in the Big Easy) is on sale on Amazon until the end of October: http://amzn.to/1uFRbvl You can get each book for less than a dollar!