My Life, My Mystery 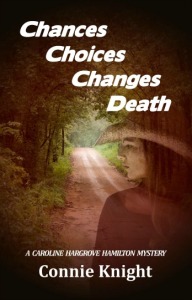 The following is a guest post by Connie Knight, author of Cemetery Whites and Chances Choices Changes Death. If you would like to write a guest post on my blog, please send me an e-mail at contact@cecilesune.com.

The truth is, I have a life, but I haven’t really lived a mystery. You can incorporate something you once observed into the story you’re thinking about, even if it’s fictional rather than the literal truth. I remember comments from Muriel Spark who noticed someone’s fragile, delicate hands once, and gave them to someone else she invented. Flannery O’Connor admitted that her stories were set back in time by a generation, into the time of her childhood rather than her current years.

My writing calls upon my memories. I’ve always liked to read mysteries, especially cozy mysteries, and that’s the genre I’ve chosen for writing novels, which I’ve started lately. I’ve written during high school, college and a journalism career. My two mysteries are Cemetery Whites and Chances Choices Changes Death, with a third one in progress. They’re set in a small town in Texas with Caroline Hargrove Hamilton as the amateur sleuth. Caroline, her aunts and uncles, friends and cousins, occupy a setting recalled from my childhood, although what I write about it is not what it was. It’s just that when I want to create a character or make something happen, there are memories to draw upon.

Some of the memories aren’t happy, so I’d rather write a cozy mystery and use mean people for villains, bitches and bastards in their greedy cruel revenge. Most of my other characters are good people to higher or lesser levels, inspired by things I learned in my early days of going here and there with my parents.

My father served in the Army, and my mother returned to her family in Louisiana whenever Daddy was sent somewhere. I remember living on Army posts, but then I’d go with Mama and my sister Beth to Grandma’s house in Louisiana while Daddy went off to Korea or Okinawa. This was pre-school, but Grandma taught me to listen to her when she read a children’s book to me, or the Sunday comic strips. I started first grade there, but Daddy returned and off we went to White Sands Proving Grounds in New Mexico. There wasn’t any housing on the post, so we lived in a motel in Las Cruces where I attended Pacheco Elementary. There was a stack of Dick and Jane books in my classroom, and I quickly read through all of them. Then we moved to the White Sands post and I attended that school to finish first grade and sail through the second.

What to remember: how the wind blew the sands, and the girls wore dresses. We were taught to protect ourselves from the sand by hunching down to the ground, burying our faces in the skirts of our dresses. That happened more than once. Then Mama warned us to be careful when we walked to school or the Saturday movies. “Don’t get in a car with anyone you don’t know; just run away and call for help if they follow you.” Well, that happened. Beth and I walked home on a scorching day, and someone in a sleek black Cadillac pulled up next to us. The driver asked us to get in, but we ran away. We didn’t recognize the blond lady. Her husband was the post commander, as we found out later. 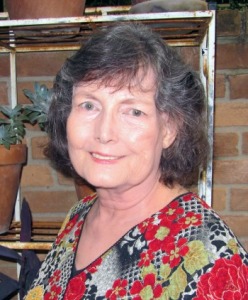 Daddy served at Fort Sam Houston in San Antonio next. His family went back for generations in the rural counties near San Antonio, and we went to visit Grandma and Daddy’s brothers and their children—my cousins. By now, my father and his brothers lie in a row in our family cemetery, and the cousins are scattered, but some are still there. I visit the country and visit them. My books draw upon the past years in the country, and move forward into today.

Even though we lived in San Antonio, Daddy rented an old farmhouse and a few acres on the edge of the city. We adopted an uncle’s poultry—chickens, turkeys, and a few peacocks. There was a pig, too, in the furthest corner from the house. That was a time of drought, and our cistern went dry in the summer. It was so hot; we spent summer afternoons on a screened-in porch shaded by a huge oak. Even so, the crayons melted in their bowl. I read Tom Sawyer and a children’s encyclopedia,The Books of Knowledge, and went through the accompanying dictionary.

Before the summer was over, we were off to Germany. Daddy was stationed at Landstuhl, a large medical Army complex. After White Sands and drought-stricken Texas, Germany was enchantingly moist and green. I made two friends and we formed the DDEC, the Daring Devils Exploring Club. We climbed over the chain link fence to get off the post onto a steep hillside looking down on a pasture and a highway. Once I fell from a ledge and landed flat on my back. Thank God for that; I could have broken a leg, or my neck.

After a year, Daddy stayed in Germany but Mama took Beth and me back to Louisiana. We stayed there for three years, and I became very attached to Grandma and Louisiana. Life expanded; in the years we spent there, I had easy access to the library, even the adult section. Mother Estelle encouraged me to write a play, some poems, a short story, other things. Aunt Madeleine took me to a book store for my birthday; we left with nineteen copies of Nancy Drew mysteries. I treasured those and read them repeatedly.

When we returned to San Antonio, Daddy retired and we stayed there. I spent four years at St. Teresa’s Academy, a day scholar at a girls’ boarding school run by nuns based in Madrid, Spain. They were missionaries to America, and most of the boarders came from Mexico, Guatemala, Costa Rica, Cuba, Venezuela, Nicaragua, and more. Their cultural varieties and Spanish language interested me. I took three years of French, one of Spanish, and one of Latin. Saturated by the nuns and Catholicism, I thought about becoming a Carmelite, but that didn’t happen. I graduated as valedictorian, received a college scholarship, and became an English major, even though I didn’t know what I’d do with that degree.

I never did figure it out. I dropped out of college, ended up in San Francisco, and became a hippie (anti-war, pro-peace, no dope). It took a while to get back into school, where I studied creative writing and then journalism.

So writing and reading never stopped. Now, as an author of cozy mysteries, I’m glad to have so much to remember.