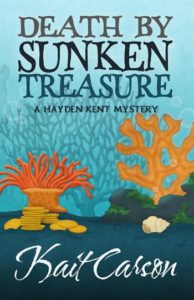 The following is a guest post by Kait Carson, author of Death by Sunken Treasure, the second book in the Hayden Kent Mystery series.

The first book I ever wrote (now residing under my bed, but one I promise myself I will revisit one of these days), was a romance. It was called Caribbean Knights. A contemporary story despite the name set on the super romantic island of Sint Maarten. A funny thing happened in my future books (those under the bed and those published). No matter how they started out, someone died. I finally gave in and realized I was meant to be a mystery writer.

Death by Sunken Treasure is a mystery novel. Mystery and romance are not mutually exclusive. Indeed, romance and sexual tension provide some of the best motives for murder. Conflict is inherent in interpersonal relationships and the closer the relationship, the more the potential for conflict. Hayden Kent is involved with her boss, Grant Huffman. Although the two have worked together for a while, their affair is in its early days. Because he’s Hayden’s boss, the budding relationship is a source of internal conflict and external conflict. Internal because she’s not sure what she would do if the relationship tanked. Now there’s an embarrassing moment to contemplate. External because, well, she does have co-workers and no matter how Hayden tries to hide it, water-cooler speculation is rife.

Then there’s the victim. Mike Terry. Despite Mike’s recent good fortune in uncovering a sunken Spanish galleon loaded with treasure, he’s discovered that the prize brings no good luck. The find brings tension between Mike and his current girlfriend Lisa Freeman. Lisa has secrets of her own that would sink the relationship if Mike uncovered them.  Add Mike’s ex-wife, Kristin Terry, into the mix and the motives and suspects multiply. Kristin knows where the bodies from Mike’s past are buried. She’s not afraid to threaten to use that knowledge to earn an upwardly revised alimony settlement. 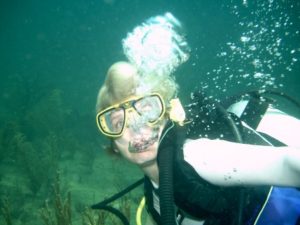 Relationships and romance are as important to a mystery novel as they are to a romance novel. They are part of the joy and the pain of real life. Leave them out of any book, and the story seems flat and uninspired, the characters missing essential dimensions that make them come alive on the page. Do Mike’s or Hayden’s relationships have anything to do with solving the mystery of Mike’s death? Only the reader can answer that question.

More about the author and her work: Kait Carson’s Website.