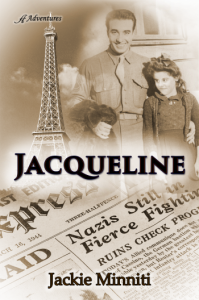 The following is a guest post by Jackie Minniti, author of  Jacqueline. If you would like to write a guest post on my blog, please send me an e-mail at contact@cecilesune.com.

I’m a firm believer that nothing important happens by chance. This belief has been validated  many times as I’ve traveled through the sixty-seven years of my life, but never more than a recent experience that shed a new light on an old story.

My dad is a WWII veteran who turned 99 in October. The day after D-Day, he was a handsome young army sergeant arriving in Rennes, France with the 127th General Hospital. During his tour of duty, his heart was stolen by a little French girl named Jacqueline. For some reason that was never clear, she took a liking to my father and began following him to the hospital in the morning and waiting for him at the hospital gates when his shift ended. The tale of their friendship was the only war story he was willing to share, often with misty eyes, and it eventually became part of our family lore. He never tired of retelling the tale of how I got my name.

When I retired from 25-years of teaching and started my second “career” as a writer, Dad began urging me to put the story on paper. I explained that, while the family loved his narrative, it would not interest the average reader. Besides, while there might be enough material for a short story, there certainly wasn’t enough to fill a book. But the seed had been planted, and Jacqueline took up residence in my mind, a character in search of a story. I found myself drawn to the faded pictures in my dad’s old photo album where a little girl with dark curly hair smiled back at me. What was it that drew her to my father? Where was she now? Did she ever think about the girl in America who became her namesake?

As I’ve said, I’m not a believer in coincidences, but a chance encounter with a stranger set into motion the chain of events that gave me the answers I was seeking. At my son’s wedding reception, an unfamiliar man approached me. “I have to talk to you,” he said, motioning me to a table where my dad sat. “Your father says you’re a writer. He’s been telling me the most amazing story. You’ve got to write a book about it.”

I smiled politely and started to explain why it couldn’t be done, how the story wouldn’t appeal to the average reader, but he stopped me. “I have a daughter in sixth grade,” he said. “She doesn’t know anything about World War II. She’d love to read a story like this, and it could help her learn history.”

And there it was – the “Eureka!” moment.  A cartoon lightbulb went on over my head. Why hadn’t it ever occurred to me to write this as a book for younger readers, especially after I’d spent so many years teaching reading in middle school?  When Jacqueline met my father, she was the same age as the kids I’d taught. She’d be a perfect character in a story written for them. And there was so much they could learn from her. I could do this! 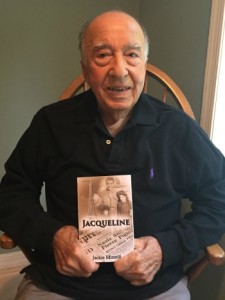 My research took me deep into the history of the Second World War. I was amazed at how little I, only one generation removed from these events, really knew about the bravery, selflessness and sacrifice that characterized the veterans of the Greatest Generation. My admiration grew until I felt compelled to make this era come alive for young readers. As I began writing, Jacqueline was soon joined by her brave mother, a mischievous Jewish boy and his family, a stylish young French woman, a grumpy nun, and a one-eyed cat. The story unfolded before my eyes, and as the characters took on lives of their own, it was sometimes difficult for my written words to keep up with them. They showed me the importance of faith, family, friendship, and the resilience of the human spirit.

For as long as I can remember, I’d dreamed of becoming a published author. When I finally typed “The End,” I knew that this was the book that would make it happen. Sure enough, the manuscript was picked up by Anaiah Press, and I was rewarded with the proudest moment of my life – putting that book in my father’s hands. And the most ironic thing of all is the way “average readers” have embraced the story. I guess this goes to show that, if you wait until the stars and planets align just right, even your wildest dreams can come true.

About the author and her work: Jackie Minniti’s Website.