The Metaphysics of Ping Pong by Guido Mina di Sospiro 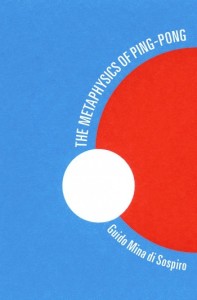 The following is a guest post by Guido Mina di Sospiro, author of The Metaphysics of Ping Pong. If you would like to write a guest post on my blog, please send me an e-mail at contact@cecilesune.com.

When I was a child I used to go to a summer camp in the Dolomites, a mountain range in the Alps in north-eastern Italy. We boys and girls played, hiked, picnicked, flirted and enjoyed the great outdoors and the invigorating mountain air, which gave us voracious appetites. When it rained, we were corralled into a huge recreation room on the first floor of the building, with large windows looking out towards the mountains. In it there was a single ping-pong table, access to which was determined by the Draconian rule of ‘winner stays.’

One boy, a little older than most of us – fourteen or fifteen – was clearly the best player. No matter how much we tried, he would spend every rainy day at the table, undefeated. He wielded a Butterfly – a high-quality Japanese racket – with the ‘mythical’ Sriver inverted rubbers. Unlike most other rackets in that recreation room, the rubber on the Sriver had the characteristic pimples in, leaving the smooth side of the topsheet to strike the ball. We, on the other hand, played with whatever was available. It was the 1970s, ‘Made in Japan’ was invading the world and certainly occupying almost militarily that ping-pong table high up in the Dolomites in the hand of that skilful player. It’s curious how I don’t remember his name but do remember his equipment so clearly. Indeed the Butterfly Sriver is a mythical rubber. Thanks to many updates and new incarnations, it is still used at the highest levels. Introduced in 1967, this rubber was off to a very good start, having quickly become the weapon of choice for advanced players. Today, more than twenty World and seventy European Champions have won their titles with Sriver.

I asked the player wielding the Japanese racket where he had bought it and, I recall vividly, he said that he had bought the ‘blade’ (which back then sounded menacing, but it’s only the portion of the racket to which the rubbers are attached) in one place, the rubbers in another, and then had glued them onto the blade and cut the rubbers precisely to size. This sounded fantastical to me. ‘You’ve done all that? Really?’ I said, in disbelief.

He looked at me superciliously.

I pressed on: ‘What for? Why make one step into two? Why didn’t you buy it ready-made?’

‘You mean, preassembled?’ yet more superciliously.

Is that what it’s called? I wondered in my mind and said: ‘Yes, of course, pre-as-sem-bled.’

He frowned as he replied, ‘We don’t bother with those…’ and moved away, visibly annoyed by both my impertinence and my ignorance. 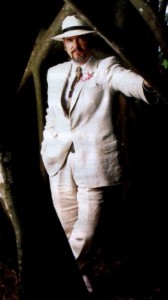 The Butterfly Sriver would not by itself improve my game, but it was a marvel. Not that I ever got one, but another, lesser Butterfly I did manage to buy. And with it I began to experiment.

Once into my teens, I no longer went to the summer camp in the mountains, but to the sea instead. I remember a ping-pong table there, in the shade of a large magnolia tree. My hand, aided by my new racket, began to learn not only to push the ball across the net, but how to make it travel across the air while rotating. The effect as it touched the table was, I thought, amazing. I was learning some basic spins, which I’d test on a more or less willing guinea pig, my sister. She would expect the ball to bounce normally on her side of the table and instead it would bounce sideways, to the left or to the right, and she would miss it. Later, I learned to make the ball bounce up more than expected, or to backspin it so that my sister would return it invariably into the net, much to her frustration. She and other beginners thought that it was magic, while I enjoyed passing for a magician.

So my earliest approach to ping-pong was not inspired by speed. Not that speed doesn’t have its role in ping-pong – and how! – but back then it seemed to me that there was tennis for that, with brawny people running around a big court grunting in the sun. No, what caught my imagination, and still does, was spin. Without knowing it, I was on the right track, as the consensus nowadays is that ping-pong is first and foremost a game of spin.

And that was how the passion was born, a passion that incubated for decades and exploded with virulence when I was in my forties. The outlandish adventures, various initiations, assorted tribulations, and lessons in non-Euclidean geometry, non-linear thinking and in philosophy I was to gain from my passion for table tennis were, at the outset, inconceivable. The seed planted at the Henry Miller Memorial Library in Big Sur, California, where there is a ping-pong table and visitors are allowed to use it, germinated and took me, within a few years, all the way to mainland China. All this I have recounted in my book The Metaphysics of Ping-Pong, part memoirs, part philosophical essay, part picaresque story-telling.

About the author and his work: Guido Mina di Sospiro’s Website.