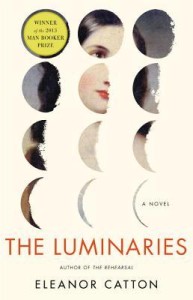 Yesterday, the 14 winners of the 2013 Governor General’s Literary Awards were announced. Eleanor Catton won the best English fiction for The Luminaries. She also won the 2013 Man Booker Prize earlier this year. So now I have no choice but to read her book! 🙂 The story seems very interesting though, so I’m sure I will enjoy The Luminaries. I will post a review later on.

Here are all the winners of the 2013 Governor General’s Literary Awards (this list was taken from the Canada Council for the Arts’ website):

The Luminaries by Eleanor Catton is an entire narrative universe with its own mysterious cosmology. This exhilarating feat of literary design dazzles with masterful storytelling. Each character is a planet – complex and brilliantly revealed. Precise sensual prose illuminates greed, fear, jealousy, longing – all that it means to be human.

The short story collection Quand les guêpes se taisent by Stéphanie Pelletier proposes a sensitive and intimate vision of the world based on everyday occurrences. Thanks to a masterful use of language, stories that we care about and fundamental subjects – love and heartbreak, life and death – this work is universal, and sometimes even sublime.

In spare, minimalist language, North End Love Songs attends to the demands of Indigenous and European poetics, braiding an elegant journey that takes us from Winnipeg’s North End out into the world. We enter the undocumented lives of its citizens and celebrate them through Katherena Vermette’s beautiful poems.

Pour les désespérés seulement by René Lapierre is a book for those who do not turn a blind eye to the often desperate state of our world. A collection that brings us back to what really is and that evokes, in counterpoint, nature and botany, giving us a glimpse of ‘the infinitesimal joy that watches over us.’

Nicolas Billon’s Fault Lines takes a unique and dramatic look at climate change. Greenland, Iceland and the Faroe Islands inspire the playwright’s provocative, theatrical triptych. Urbane and sophisticated strategies of monologue are honed to a laser probe into the interiors of contemporary consciousness.

Bienveillance is a mature and polished work, and in it we sense the love that Fanny Britt feels for her characters. In few words and with a lovely mastery of dramatic writing, the author gives us a devastating tragedy that reveals itself little by little, allowing us to perceive the enormity of small disasters. This play is funny, disturbing, and rings absolutely true.

Journey with No Maps: A Life of P.K. Page by Sandra Djwa is a compelling portrait of a complex woman who pushed boundaries in both her art and her life. An insightful discussion of the power of her poetry, the book also illuminates Canada’s literary history in its formative years.

The Unlikely Hero of Room 13B by Teresa Toten is a transformative, high-energy novel that vibrates with the creativity of both the writer and main character. Adam struggles with OCD (obsessive‑compulsive disorder) and a troubled family life. His group therapy becomes an unlikely source of love and friendship. A powerful story with brilliant language and unexpected moments of humour.

With À l’ombre de la grande maison, Geneviève Mativat gives us a novel about slavery, in an America that has yet to wage its true revolution – that of liberty and equality for all. In sober and effective prose, the author reveals her strong talents as a storyteller.

Matt James’s unique illustrations set our imaginations soaring as they steer us through Stan Rogers’ famous ballad, Northwest Passage. The ink and acrylic paintings explode with raw effects and vivid colour, sometimes settling to small ice-blue vignettes. Each page is descriptive of the search that obsessed much of the world for hundreds of years.

With sensitive and subtle images, Isabelle Arsenault succeeds magnificently in depicting the overwhelming universe of a young girl. With admirable restraint, the sober illustrations and quiet colours strike a responsive chord as they broach the sensitive subject of bullying.

In The Major Verbs, Donald Winkler has embraced the beauty, deep meaning and spirit of Pierre Nepveu’s elegantly simple poetry. The poems offer a vision of things at work in our lives, like forms of verbs and things we see but fail to see, such as fatigue, stones, death and survival.

French translation of Far to Go by Alison Pick

L’enfant du jeudi is a masterful work in every respect. Sophie Voillot has translated this novel about memory with fluidity and transparency. With her subtlety, her command of the language, and her poetic sensibility, she has managed to transpose the feelings of the author and render a historical reality that remains hard to even imagine accessible to francophone readers.